Piston engines, also known as reciprocating engines, are relatives of steam engines which first appeared in the early 17th century.  In today’s aircraft piston engines, gas propulsion replaces steam in creating pressure within the engine. Piston engines are characterized by one or more cylinders, each containing a piston (which is able to move freely back and forth within the cylinder.  Each piston is connected to a crankshaft, via a connecting rod.

Piston engines were used to power all aircraft until jet engines were first conceived in the early 20th century.

Turboprop aircraft are powered by a close relative of the turbine engine. A turbine a rotary driven fan that derives energy from fluid flow or airflow. A simple turbine design includes a rotor to which angled blades are attached.  As air moves through the blades, the fluid or air pressure against the blades will cause the rotor to spin.  In an aircraft turbine engine, high-pressure gases, resulting from the combustion of jet fuel, take the place of water or wind in driving the motion of the rotor.

For this reason, aircraft turbine engines are categorized as gas turbine engines. Fuel is introduced and ignited within the combustion chamber, driving an explosive force of hot air through the turbine and causing it to spin. The rotating turbine, which is connected to the compressor via shaft, sustains continuous engine operation by driving rotation of the compressor fans.  Simultaneously, hot air exits the engine at incredible speed, providing a powerful jet stream out the back of the engine.  It is this jet stream thrust that propels the aircraft forward. The turbine of a turboprop aircraft drives of a rotating shaft, which in turn drives a reduction gear, which ultimately drives a propeller.  The reduction gear is necessary to convert the high-speed shaft rotation into slower, functional propeller speed.  Most of the power generated in a turboprop aircraft is used to drive the propeller.

From a manufacturing and engineering perspective, the reciprocating engines found in piston aircraft are far less complex than their turboprop counterparts.  This is primarily due to the high temperatures and forces unique to turboprop engine operation. While piston engines are indeed a more simple design, turboprop engines have far fewer moving parts and the smooth, vibration-free operation of a turboprop engine typically offers greater reliability and longer time between overhaul than a piston aircraft. The power of a turbine engine almost always allows turboprop aircraft to travel at higher speeds than piston aircraft.  And as turboprop aircraft cabins are typically pressurized these planes also commonly fly at higher altitudes.

Turboprop aircraft are generally most efficient at altitudes of 20,000 to 30,000 feet and at average speeds of 250 to 300 ktas, while piston aircraft, which are typically not pressurized, are usually restricted to altitudes of 12,000 feet or less.  And as piston engines are less powerful than turboprops engines, piston aircraft speeds are generally limited to about 200 ktas.

Piston aircraft are generally smaller aircraft, seating no more than six passengers, and are well suited for relatively short flight of 300 miles or less, while turboprops tend to be larger aircraft with greater passenger capacity and are more likely to be found flying distances of up to 1,000 miles. 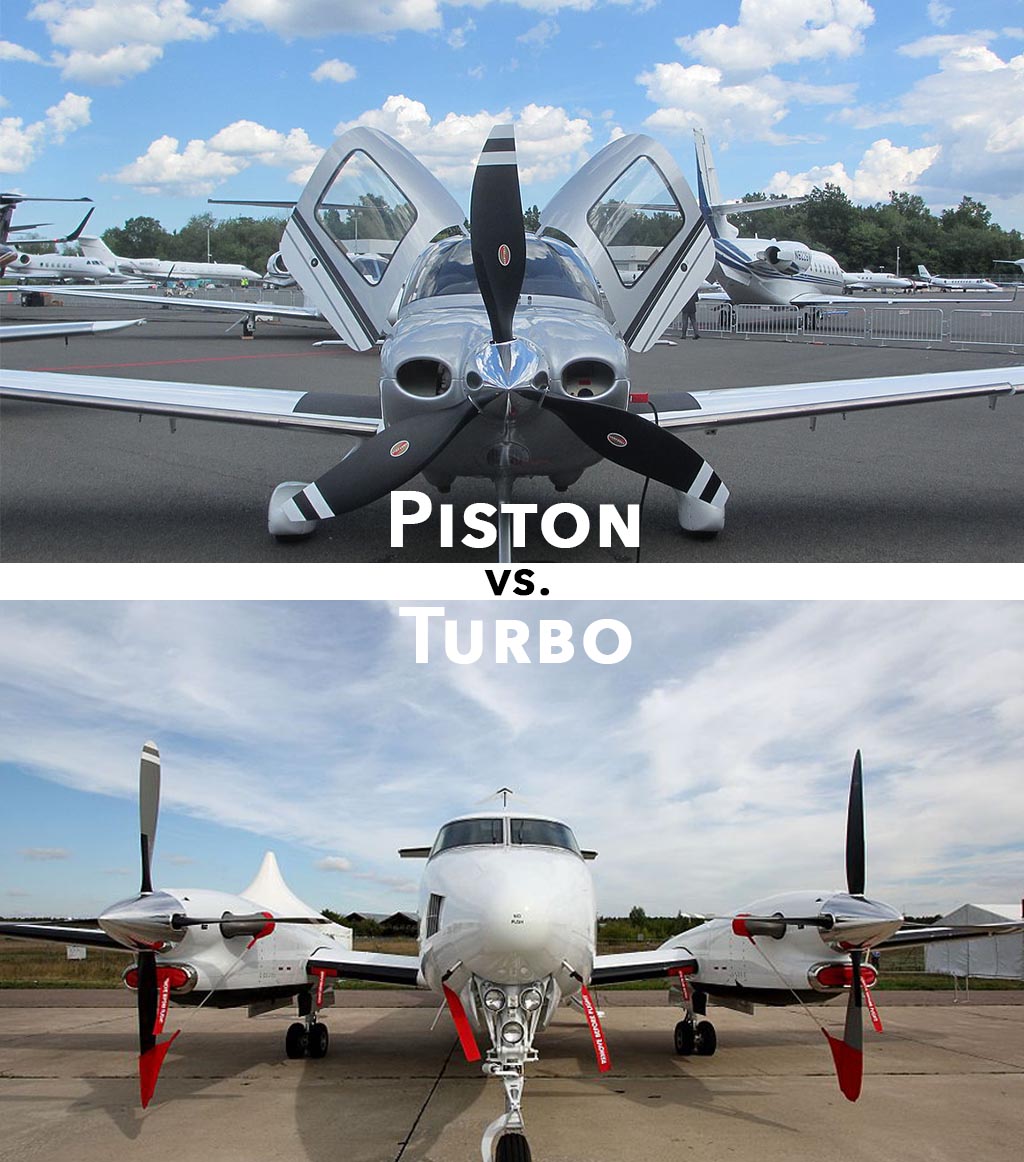