Mercury Jets is an on-demand air charter provider specializing in private jet charter and services in Seattle. Our team is composed of industry-leading professionals dedicated to providing our customers with the ultimate air charter experience. We are committed to safety, reliability, and white glove customer service. To obtain a charter quote tailored to your specific needs, please fill in the request form or call our agents 24/7 at +1 (212) 840 8000. 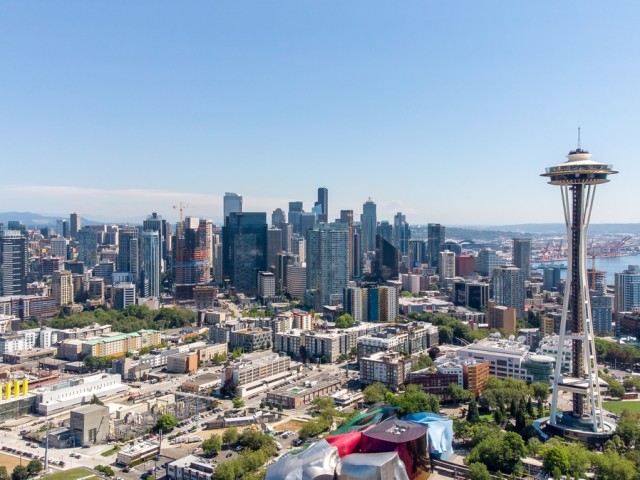 Seattle is the largest city in the Pacific Northwest because of its natural surroundings and dynamic city life. It is located on the Puget Sound, and surrounded by Lake Union, Elliot Bay, Lake Washington, the Cascade Mountains, the Olympic Mountains, and Mount Rainier. A private jet to Seattle is a very popular destination and it serves as a highly significant commercial, industrial, financial, and transportation hub on the North American continent. Additionally, it is regarded as one of the country’s top five most important ports for trade purposes. With our company, you can charter a private jet to Seattle with all the amenities and comfort.

Within Seattle’s city district, there are many stunning museums, cafés, theaters, farmers’ markets, concert halls, and 5-star restaurants, including the 500 ft. tall Sky City restaurant, which is situated at the top of the world-known Seattle Space Needle. The Space Needle Tower is the city’s most recognizable landmark. It features an observation deck that provides a breathtaking panorama of the surrounding area, including the city, the harbor, and the Lake Michigan Canal. With a private jet to Seattle, you can admire a stunning view of the city while having dinner in one of the most famous restaurants.

The nickname “Emerald City” is suitably given to Seattle due to the abundance of parks, gardens, and flower beds found throughout the city. But at the same time, Seattle is a city of the future with its glass and concrete buildings and daring architectural concepts. When you charter a private jet to Seattle, you will notice these features in buildings like Seattle Public Library, Museum of Pop Culture, and Columbia Center

A private jet to Seattle will also bring you to the birthplace of some outstanding people, such as Bill Gates and Paul Allen, founders of Microsoft, Jimi Hendrix, one of the most famous guitarists in the world, and Kurt Cobain, the founder and frontman of the band Nirvana. Since the very first Starbucks coffee shop in the United States was established in this city, it is also recognized as a cultural forerunner in the realm of American coffee culture. Additionally, it is considered one of the “fathers” of the national aviation industry because Boeing was set in place in this city.

Seattle is served by the Boeing Field International Airport (BFI) and the Seattle Tacoma International Airport (SEA), which are located within 13 miles of Downtown Seattle. A quick 50-mile radius search reveals over 28 private jets in the area. Transient aircraft is very popular in Seattle especially in the states of Nevada, Montana, and Oregon.

The most popular private jet types for private jet charter Seattle are light jets (Beechjet 400A, Learjet 35A, and Learjet 31), super-midsize jets (Challenger 300), midsize jets (Learjet 60, Learjet 35), and large jets (Falcon 900EX, Falcon 2000, and Challenger 604). There are also turboprop options including King Air 200 and helicopters like Eurocopter AS350, Bell 206 Jet Ranger, and Bell 210. Call us and we will find the best aircraft options for you.

How much does it cost to charter a private jet to or from Seattle?

Visiting Seattle by private jet is a convenient way to see the lush evergreen forests or to take off for a business conference. The price for a Seattle private jet usually depends on the severity of the flight and the type of aircraft. Start by calling us for a complete consultation on everything you are interested in. You can also get an estimate on the price of a private jet charter in Seattle by using our online calculator.

Here are some target prices for private jet charter flights to or from Seattle:

Which aircraft should I choose charter jet Seattle?

We offer our clients one of the largest and most diverse fleets of private jet aircraft for air charter Seattle. Private jet charter Seattle costs can vary significantly depending on the flight time and the type of aircraft. Contact our consultants in your preferred way and get help in choosing the private plane charter in Seattle that will meet your unique travel needs.

How to book my charter jet to Seattle?

When you travel by charter jet to Seattle you have maximum flexibility in choosing your flight and departure date. The most convenient way to book your flight is to use our agents. Call us to discuss your private jet needs and to get expert assistance in booking and putting together the perfect itinerary.

How to book an empty leg flight on the jet charter Seattle?

Empty Legs is a great way to travel by private jet at a great discount. We offer Seattle empty leg flights, providing competitive fares and quality private flights. The price depends on many different factors, like the type of plane requested and where you’re going. Please, contact our agents for detailed information.

Are there any luggage restrictions or guidelines on the Seattle private jet?

Commercial luggage restrictions do not apply to Seattle private jet charters. There are numerous baggage guidelines, but it is most important to inform our agents in advance if you will be carrying any oversized or fragile luggage on board.

What documents do I need for air charter service in Seattle?

International aviation rules and regulations are the same for passengers on commercial flights as they are for Seattle charter flights. In addition to your passport, it is important to have a valid visa to cross the border and land at the airport. You can ask our consultants for more information about private jet documents and other important details.

Private jet passengers travel with much more freedom, convenience, and comfort to where they want to go, at a time of their choosing. If you don’t find the answers to all of your important questions here, you can contact one of our experts or visit our private jet charter FAQ page.